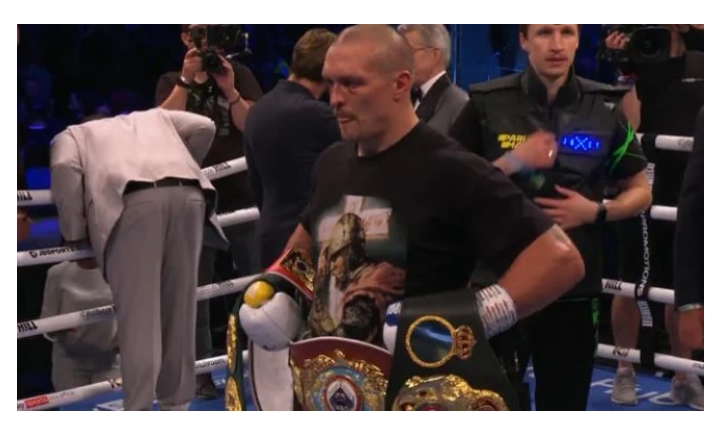 Anthony Joshua’s reign as world heavyweight champion ended in London on Saturday after he was defeated by Oleksandr Usyk.

Oleksandr Usyk is crowned as the new unified world heavyweight champion after a unanimous decision win over Anthony Joshua with scores of 117-112, 116-112, 115-113.

He has become the third boxer after Evander Holyfield and David Haye to win world titles at cruiserweight and heavyweight.

The 34-year-old won heavyweight gold at the London 2012 Olympics while Joshua triumphed in the super-heavyweight division.

Anthony Joshua earlier said he had no intention of vacating any of his heavyweight belts.

The British boxer had put his WBA, WBO and IBF heavyweight belts on the line against the WBO mandatory challenger from Ukraine.

Joshua is, though, expected to invoke a clause giving him a rematch and Usyk was asked after the fight where he would want the return bout to take place.

“I would love to have the rematch at Olympiyskiy Stadium in Kiev,” he replied.

Joshua’s promoter Eddie Hearn dropped a heavy hint that the rematch would, however, take place in the United Kingdom.

“We will work together to maximise (the income), Ukraine is very unlikely,” said Hearn. “I think it will be international or the UK, I would think it would be in the UK.”

Joshua, who now has a professional record of 24-2, finished the fight slumped against the ropes and was lucky not to be knocked out by his opponent.

But he said he was not looking at the defeat with any negativity.

“If it went well then it would have been perfect but it didn’t so I can’t really look at it and have any regrets,” said Joshua.

May Edition Of Urock Magazine